Recently, users have been asking about the most comfortable hardware configuration for using PC-3000 Flash, PC-3000 Express or PC-3000 UDMA-E. A lot of engineers are still working on computers with Core 2 DUO CPU and 2GB of RAM, but this configuration is outdated and if you want to recover huge NAND Flash cases with 32-128Gb capacity, or working with complicated RAID configuration, you should get faster Personal Computer. We decided to compile a short list of configurations of different price categories, which should be enough for any complicated case.

Intel CPU based on latest architectures like Haswell, Skylake, Coffee Lake provide a high performance. At the same time in 2017 new generation of AMD CPU has been released. New AMD ZEN micro-architecture become very powerful and it allows to work even with the most complicated cases like Flash, HDD and RAID recovery. We strongly recommend to pay attention to Ryzen CPUs – they become much better than previous generation – AMD FX which were not so good

Finally, we can compare the models of CPU like:

END_OF_DOCUMENT_TOKEN_TO_BE_REPLACED

Hello Friends! As you know, the Second Level Translator (T2) is a very critical FW part which affects HDD normal work and data access. Previously, if the T2 was damaged, we  had to use RAW recovery in PBA mode in order to get access to the files. In the PC-3000 Software Version 7.2.x, we can do more to recover the T2 and get data access. Let us review this new PC-3000 feature in the article below. END_OF_DOCUMENT_TOKEN_TO_BE_REPLACED

If you’re familiar with SSD data recovery, you should have already faced different types of controllers and know that Marvell-based drives are one of the most complex to work with.
The main thing is that every single manufacturer dealing with Marvell controllers writes their own firmware for each SSD model. It adds a lot of additional issues for our developers trying to find the solution for such drives. As you know, to be able to work with the drive that has some FW issues we need to have a special utility developed for this particular model of the drive. 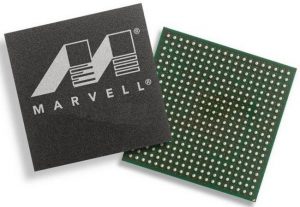 Beginning with the PC-3000 software version 7.1.x, a couple of drives based on  88SS1093 has been added. We already had some drives with this controller in the support list but because of the complexity of such controllers adding new drives has been not so easy. Our developers managed to find out how to work with Ramaxel and Lenovo modifications of this controller, and in this article, you will see what steps should be taken if you need to recover data from such SSDs. END_OF_DOCUMENT_TOKEN_TO_BE_REPLACED

The ports of PC-3000 Portable III (Port 0, 1, 2) function using high-speed PCIe-1, 2 and SATA-1, 2, 3 protocols thus providing for the data transfer rates up to 5 and 6 Gbit/s respectively, i.e. effectively the data transfer rate reaches the SHF radio frequency range imposing particular requirements on the transfer lines (PCB conductors, interface cables, detachable connectors). To ensure correct functioning of such high-speed serial interfaces, every part thereof including the Host (microcontroller), Interconnect (transfer line), and the Device (the drive), should be in balanced alignment with each other.

END_OF_DOCUMENT_TOKEN_TO_BE_REPLACED

The ACE Lab developers constantly research drives, which results in a rapid expansion of the Support List for most of the modern SSDs. So with the PC-3000 Systems that support Solid State Drives, you will always be on the cutting edge of
data recovery technology!

END_OF_DOCUMENT_TOKEN_TO_BE_REPLACED PC-3000 Portable III with SAS Adapter and Utilities is able to work only with native SAS drives and does not support old IBM families.

END_OF_DOCUMENT_TOKEN_TO_BE_REPLACED

PC-3000 for HDD. How to unlock SED on WD SMR drives without a special board

In June 2022, we released a new PC-3000 software version 7.1.x,  and one of the main features in this update is the SED unlocking option for new WD SMR families.

It means that now you don’t need to buy a special unlocked PCB to get the Service Area access on these drives anymore! 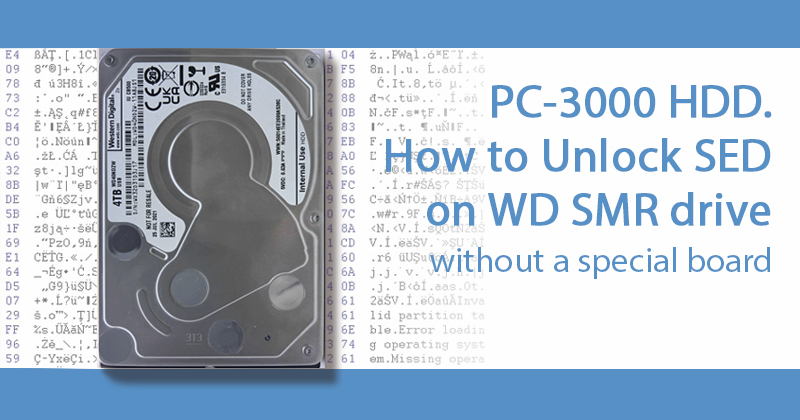 In this article, we describe how to use this option in practice.

END_OF_DOCUMENT_TOKEN_TO_BE_REPLACED

PC-3000 Flash. Determination of Some Chip Parameters by ID 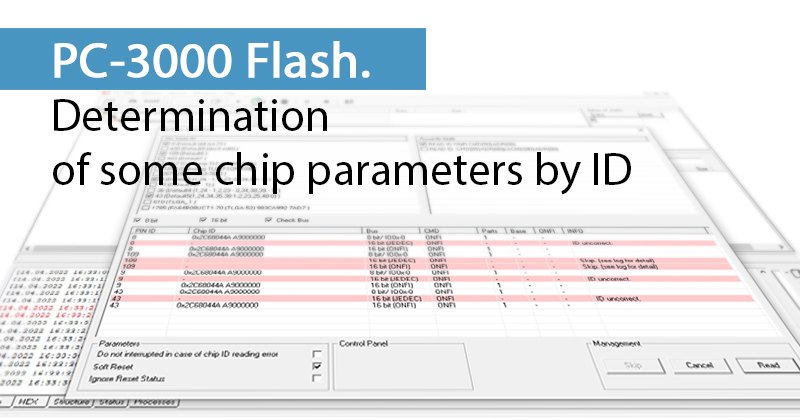 There are situations when you are reading a chip and see a detected Chip ID but it cannot be applied in the Task. As a result, it doesn’t allow to read the dump from the memory chip. Such behaviour may be if:

► The chip has physical damages or was overheated during the unsoldering process
► The memory chips reference book doesn’t have reading parameters for a certain Chip ID.

The information below will be useful when adding read parameters for new (unknown) memory chips and is intended for users who understand the main principles of NAND.
If you are new in NAND data recovery, we recommend studying these principles first.
Of course, you can try to find a datasheet for a certain memory chip and take reading parameters from there. But sometimes there is no possibility to find that datasheet or some parameters are missing there (not described).

Reading parameters detection is an investigation process and requires some specific knowledge. In this article, we’ll overview some ideas that can be helpful for you during this process. Anyway, we strongly recommend to contact our Technical Support Department if you get an unsupported NAND ID during your data recovery process.
END_OF_DOCUMENT_TOKEN_TO_BE_REPLACED

Today we are going to talk about the monolith cases produced by SanDisk, namely presented in the variations of 200 GB and 400 GB models. 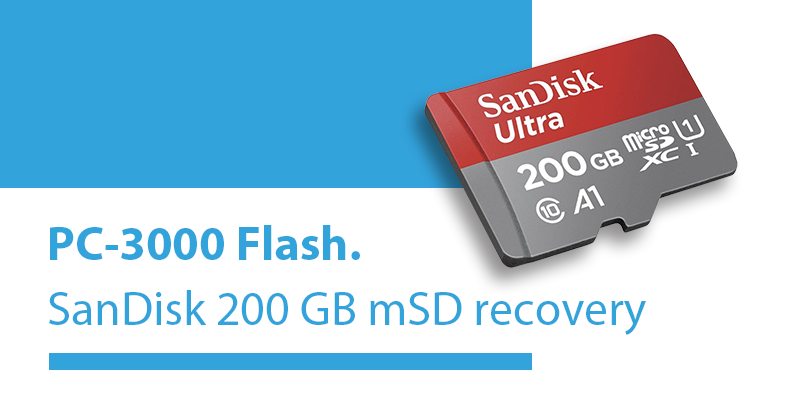 Such cards were released a few years ago and remained the mSD cards with the highest capacity for years until the 256 and 512 GB modifications replaced them.

Nowadays, SanDisk Flash drives are one of the most complicated cases. Usually, they have a lot of additional issues and features that are typical only for SanDisk modifications.